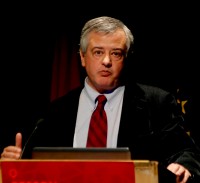 Active in other educational and training networks, Alfredo brings more opportunities to cooperate with other educational networks and associations. As an EDEN Fellow Alfredo has worked for many years with EDEN even in the times of ODL Liaison Committee.

Alfredo Soeiro holds a degree in civil engineering from University of Porto, a Ph.D. from the University of Florida. He was pro-rector of the University of Porto for Continuing Education between 1998 and 2003. Dr. Soeiro was a founding member of EUCEN (European University CE Network); RECLA (Latin American CE Network), and AUPEC (Portuguese University CE Association) His positions held were the vice presidency of EUCEN, vice-presidency of SEFI, president of IACEE, president of AUPEC and president of SEFI. His main interests are engineering education, continuing education and online learning, focusing on networking, international cooperation and student evaluation. He has also been an evaluator for the professional engineering association, was invited in several projects as external evaluator and has participated and coordinated some European projects on quality assurance of education.