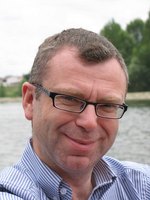 Prof. Dr. Ir. Wim Van Petegem was born in Sint-Amandsberg, Belgium, on May 18th, 1964. He received the MSc degree in Electrical Engineering at the Rijksuniversiteit Gent, in 1987, with a thesis on Analysis of sound and vibration signals for fault detection and diagnosis of a harvest combiner.

He also received the MSc degree in Biomedical Engineering at the Katholieke Universiteit Leuven, in 1989, with a thesis on Signal Processing for Electrical Impedance Tomography.

He was Research Fellow at the same university, in the Department of Electrical Engineering, in the division ESAT-MICAS, from September 1987 till September 1993, interrupted for one year military service. In 1993, he got a PhD degree, with the thesis Iterative Solutions to Electronic Problems, based on Finite Element Methods: Electro-Thermal Simulation and Electrical Impedance Tomography.

Afterwards, he went to the University of Alberta, Edmonton, Canada, for post-doctoral research on optical immunosensors. He worked there at the Department of Electrical Engineering and the Department of Immunology.

From October 1994, till September 1996, he was a post-doctoral fellow at the Katholieke Universiteit Leuven, in the Division of Biomechanics and Engineering Design, working in the field of rehabilitation engineering.

From October 1996 until October 1998, he was Senior Researcher with LINOV, the Leuvens Institute for Innovative Learning at the K.U. Leuven, involved in research on the introduction of ICT in education.

From September 1998, he was Assistant Professor at the Science and Technology Department at the Open University of the Netherlands, involved in research on Web-based learning and in education on ICT and management.

In 2000, he returned to Leuven, where he became parttime senior researcher at LINOV (K.U.Leuven) and parttime lecturer at the Katholieke Hogeschool Leuven, Department of Economics. In 2002, he was appointed director of AVNet, a central support unit at the Katholieke Universiteit Leuven, for audiovisual and new educational technologies. Currently he is active at KU Leuven’s Faculty of Engineering Technology as Expert Multicampus & Engineering Education.

The EDEN Executive Committee has unanimously agreed to assign Wim Van Petegem to the Editor-in-Chief position for three years (which is extendable) from January 1st, 2021.