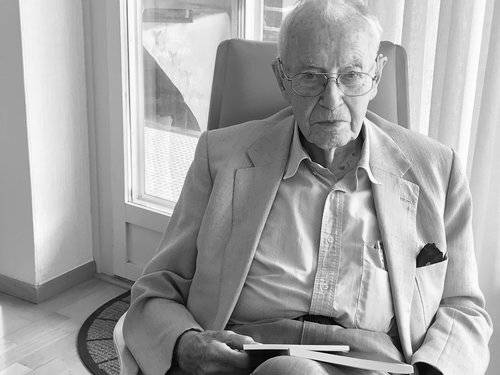 It is with deep sorrow we received the news that Professor Börje Holmberg of Lund, Sweden, former President of ICDE, passed away on Saturday 10 April 2021, at the age of 97.

He was born in Malmö, Sweden in March 1924 and wrote profusely on distance education in Swedish, German and English. A pioneer of distance education, and a former President of the International Council for Open and Distance Education (ICDE), he was awarded honorary doctorates by Deakin University in Australia and the Open University in the United Kingdom. He was a member of the Royal Physiographic Society in Lund, an academy of sciences founded in 1792, a Knight of the Royal Order of Vasa, Sweden, as well as of the Order of the White Rose of Finland.

The ICDE remembers this remarkable professional as follows: “We will in particular remember Börje Holmberg for his dedicated work and emphatic approach to distance education. The central concepts in his theory are related to motivation; empathy; non-contiguous communication; learner autonomy and interpersonal communication. In essence, Holmberg believed that by fostering empathy between the learner and the tutor through appropriate interactions, the learners would be motivated and encouraged to engage in their studies, and also master self-determinate learning. He held a general assumption that real learning is primarily an individual activity and is attained only through an internalising process. This assumption is one in which theory on distance education is based. The goal of his theory is to support individualised learning.

Börje Holmberg was an inspiring mentor, who generously shared his extraordinary knowledge, experience, international outlook, contacts and networks. His warm sense of humour and the extra twinkle in the eye reflected his empathic approach to distance learning. His strong belief in the importance of fostering empathy for the learner will remain as a fundamental reminder to all of us that the voice of the learners should always be the loudest.”

Read Professor Holmberg’s own recollections and quotes of his career and professional approach here.